This week, Ukrainian Prime Minister Denys Shmyhal said he expects shrinking access to technology to be the driving force to stave off ongoing Russian attacks. Since invading Ukraine, Russia has spent months burning nearly half of the critical military technology in its arsenal, and now Politico has shared a leaked ‘shopping list’ of the tech Russia seeks. urgently to replenish its stock. “According to our information, the Russians have already spent almost half…of their arsenal of weapons,” Shmyhal told Politico.

Among about two dozen technologies that Russia “most desperately” needs to continue its offensive are microchips made by eight US tech companies that America hopes to block Russia access through sanctions.

These companies include Marvell, Intel, Holt, ISSI, Microchip, Micron, Broadcom, and Texas Instruments. However, the sanctions can only go so far as to limit the distribution of these companies, as Russia will likely turn to third parties or unregulated markets to fill the void.

It’s the microchips that could put an end to Vladimir Putin’s offensive. Six months after its invasion of Ukraine, Russia would be strangled by a severe technology deficit inflicted by the sanctions.

Having squeezed far more firepower from their missiles than they originally intended, Moscow’s soldiers would now increasingly rely on old stockpiles of primitive Soviet-era ammunition. , while western-armed Ukrainian forces fight to turn the tide in a counter-offensive to the south with pinpoint strikes on munitions dumps and key infrastructure such as bridges.

Kyiv is acutely aware that the outcome of the war will likely hinge on whether Russia finds a way to regain access to high-tech chips and is working to ensure it does not get them. In order to signal the danger, Ukraine sends international warnings that the Kremlin has drawn up shopping lists for semiconductors, transformers, connectors, housings, transistors, insulators and other components, most of them manufactured by companies in the States. States, Germany, the Netherlands, the United Kingdom, Taiwan and Japan, among others, which he needed to fuel his war effort.

The message is clear: don’t let the Russians get their hands on these gadgets.

Poilitico saw one of the Russian lists, which is divided into three priority categories, from the most critical components to the least. It even includes the price per item that Moscow expects to pay, down to the last penny. Although Politico could not independently verify the provenance of the list, two military supply chain experts have confirmed that it is consistent with other research findings on the military’s equipment and needs. Russia.

At first glance, Russia should not be able to acquire the most sensitive technology from the lists. With only very basic domestic technology, the Kremlin has relied on key players in the US, EU and Japan for semiconductors over the past few years and these should be out of reach thanks to penalties. The difficulty would be whether an intermediary country like China should buy technologies and then resell them to Moscow. In extreme cases, the Russians seem to scavenge chips from home appliances like refrigerators.

Ukrainian Prime Minister Denys Shmyhal pointed out that the war had reached an inflection point where technological advantage was decisive.

“According to our information, the Russians have already spent almost half… of their arsenal of weapons,” he told Politico.

He added that Ukraine estimated that Russia had only “four dozen” hypersonic missiles left. “These are the ones that have precision and accuracy because of the microchips they have. But because of the sanctions imposed on Russia, deliveries of this high-tech chip equipment … have stopped and they have no way of replenishing these stocks”.

The lowest-priced item on the priority list, the 88E1322-AO-BAM2I000 gigabit Ethernet transceiver made by Marvell, can apparently be had by Moscow for 430.83 rubles apiece, or about $7. The most expensive item, a 10M04DCF256I7G field-programmable gate array made by Intel, can be had for 66,815.77 rubles or €1,107 each, depending on the listing (before the chip shortage, it would have cost less than €20). 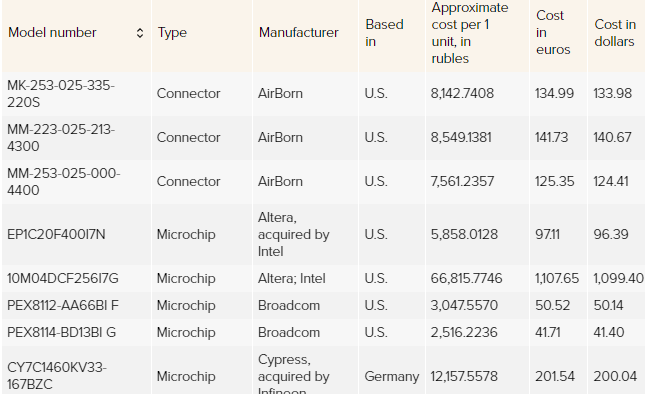 When it comes to the medium priority list, companies such as German Harting and Dutch Nexperia (which was acquired by Chinese tech company Wingtech in 2019) rank high. The Russians are looking for a range of Harting enclosures and connectors, according to the listing, including the 09 03 000 6201 and 09 03 000 6104, as well as the 74LVC1G14GV, 125 inverters from Nexperia/NXP and 74LVC244APW, 112 pads octals/line drivers.

James Byrne, director of open-source intelligence and analysis at leading defense and security think tank RUSI, said Russia is likely to buy stockpiles of Western microchips and other equipment essential for years, but could now run out.

The Russian military procurement program is “extensive, it’s well funded, and they have a huge military and industrial base producing stuff,” Byrne said. “But now that they have spent so much in Ukraine, they need a large volume of new supplies. And the sanctions are going to make it harder for them…. So they’re going to have to prioritize the critical things, and that’s why we’re seeing these documents. We obviously think they are scrambling to secure supplies.”

The reaction of some affected companies in the chip industry

“We take our responsibility as a good corporate citizen seriously,” said Brian Thorsen, spokesperson for Microchip. “In accordance with export laws, and because Russia’s actions against Ukraine are contrary to our guiding values, Microchip has ceased shipments to customers in Russia, Belarus and sanctioned regions in Ukraine.”

“For more than a decade, all Intel sales in Russia have been through distributors who are required to comply with US export controls,” said Penny Bruce, Intel’s director of corporate communications. “Intel has suspended all deliveries to customers in Russia and Belarus and will continue to comply with all applicable export regulations and sanctions in the countries in which it operates. This includes compliance with sanctions and export controls against Russia and Belarus issued by the United States and allied nations. »

Politico reported that some of the tech parts sought by Russia may still be easily accessible and smuggled into Russia through unregulated online marketplaces, but other products have long been out of stock around the world.

Without more microchips – along with other items on the Kremlin’s shopping list like “semiconductors, transformers, connectors, packages, transistors, insulators and other components” – Russia could lose its most powerful missile technology and possibly even be forced out of the conflict.

Flaws in the blockade

Since its last invasion of Ukraine in February, Western countries have tightened sanctions on Russia, increasingly targeting its microchip supply chains to diminish its military capabilities. The new sanctions come on top of years of tighter controls on sales of chips – which often fall under “dual-use goods” because they are used in both military and civilian applications – under international agreements such as the Wassenaar Arrangement as well as recent European legislation.

Experts warn that these export control regimes too often fail to stop technology transfers to unwanted actors and entities.

“Once the bullets leave the factory, it’s very difficult to know for sure where they end up,” said Diederik Cops, senior arms export and trade researcher at the Flemish Peace Institute, a research organization linked to the Flemish parliament.

Cops said Russian entities supplying the military have a variety of ways to acquire essential goods, ranging from buying them from unregulated online marketplaces to using third-party shops and mailbox companies to smuggle in smuggling high-tech kits into the country.

“Countries like North Korea and Iran have accumulated years of sanctions-busting expertise. Russia has surely been preparing to deal with it over the past few months… The Russians can also rely on historical expertise to set up such channels: it was routine during the Cold War. And it has long borders with neighboring countries and a vast network of allied states to work with,” Cops said.

The United States, Europe and other Western allies have implemented licensing regimes to prevent companies from exporting potential military technology to customers who could be seen as a security risk. But “it’s a huge challenge to monitor illegal proliferation channels, and even legal channels, to see who the end user is,” Cops said.

Sanctions imposed since the February invasion were aimed at closing loopholes and further tightening the screws on the Russian military.

Does that sound believable to you? Why ?

How do you read it?

US restricts trade with four IT companies and other entities, to combat Russian hacking groups

“Russia is ready to extradite cybercriminals to the United States on a reciprocal basis”, says Vladimir Putin, before the next exchange on security with his American counterpart